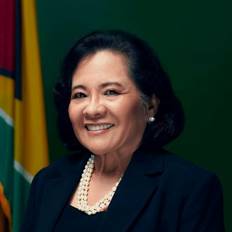 First Lady of the Cooperative Republic of Guyana

Her Excellency Sandra Marie Granger, First Lady of the Cooperative Republic of Guyana, aims to empower and improve the lives of the most vulnerable sectors of the Guyanese population.

The First Lady is committed to human rights – particularly women’s and children’s rights – and is engaged in projects aimed at improving children’s and youth’s opportunities through education.  She recognises the importance of preparing Guyanese youth for future employment and is deeply involved in STEMGuyana, which exposes young people to Science, Technology, Engineering and Mathematics, including robotics and scratch programming.

She facilitates women’s and girls’ empowerment through workshops aimed at improving their self-reliance and success in business as well as workshops on childcare and caring for the elderly.  She also promotes inter-generational interaction through programmes pairing adolescent mothers with senior citizens.

In collaboration with non-governmental organisations, Mrs. Granger works towards the social and economic development of adolescent mothers and their reintegration into the education system.

Mrs. Granger is the patron of Women Across Differences, The Guyana Foundation, the Guyana Girl Guides Association, STEM Guyana and the Step by Step Foundation.

She serves as Vice-Chair of the Spouses of CARICOM Leaders Action Network (SCLAN) which focusses on reducing adolescent pregnancy, cervical cancer, mother-to-child transmission of HIV and domestic violence in the Caribbean.

Mrs. Granger has been honoured by local and international organisations including Celebrating Woman International (2016) and by the Centre for Economic and Leadership Development (2017).

She is married to Brigadier David Arthur Granger, President of the Co-operative Republic of Guyana, and has two children and four grandchildren.