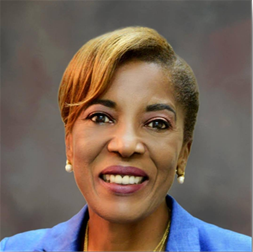 Spouse of the former Prime Minister Commonwealth of The Bahamas

Mrs. Patricia Minnis holds an earned Bachelor of Science (BSc.) degree in Biology from the prestigious Bethune Cookman University.  Upon graduating, she embarked on a teaching career at a local high school in Nassau, The Bahamas where she developed a passion for youth development.

Further, Mrs. Minnis’ passion for advancing the industry led to a two (2) year secondment at the Bureau of Standards in Jamaica (BSJ).  She is a former board member of The Bahamas Bureau of Standards and Quality (BBSQ) and served as the contact person and delegate to the Codex Alimentarius Commission (Food Code).

Mrs. Minnis is an active member of the Spouses of CARICOM Leaders Association Network (SCLAN).  As a member of this association she works alongside other First Ladies, Spouses of Heads of Government and UN Representatives to facilitate knowledge exchange which contributes positively to progress in key areas such as mental health, the reduction of gender-based violence, teenage pregnancy, HIV and AIDS.

Currently, Mrs. Minnis spearheads the work of the Office of the Spouse of the Prime Minister (OSPM) in The Bahamas.  The establishment of the office was based upon a CARICOM decision in fulfilling the mandate for support of women and advancement of specific initiatives (including the United Nations (UN) 2030 Sustainable Development Goals (SDGs)) of various regional and international organizations. The Office is a non-partisan office that was officially launched on 21 March 2018.

To date, the Office has partnered with several organizations in advancing this mandate.  In parallel with these partnerships, the office has launched several of its own initiatives to address national issues of importance; including issues relative to health, wellness, gender-based violence and education and the empowerment of women and adolescent girls.  Mrs. Minnis is an advocate for promoting education and awareness as it relates to these areas thereby fulfilling the objectives of (SCLAN) and the UN 2030 SDGs.

As an executive member of SCLAN, Mrs. Minnis is also committed to working with the First Ladies and Spouses of Heads of Government of the Caribbean Community to champion the CariWaC initiative.

Further, Mrs. Minnis is a motivational speaker and deliver speeches to junior and senior high school students through a school visitation programme that was launched by her Office in October 2018.  Through this programme, Mrs. Minnis encourage adolescent girls to complete their secondary education and delay pregnancy while promoting awareness against gender-based violence, tertiary education and professional development.

Mrs. Minnis is also a strong advocate of health, nutrition and wellness and can be seen daily working out at a local gym.  She is a marathon runner having participated in local and international races for many years.  She is a proud mother and grandmother who is deeply committed to the development of young girls and women.  This passion led her to become one of the founding members of the ‘Ladies Chambers’; a community-based programme which was established in 2012 in Nassau, The Bahamas.

Lastly, Mrs. Minnis has completed training for the practice of real estate and currently manages her real estate empire in The Bahamas.  She is an avid reader and member of Grace Community Church, a non-denominational Christian church in Nassau, The Bahamas. Mrs. Minnis is the wife of The Most Honourable Dr. Hubert A. Minnis, Prime Minister of the Commonwealth of The Bahamas.