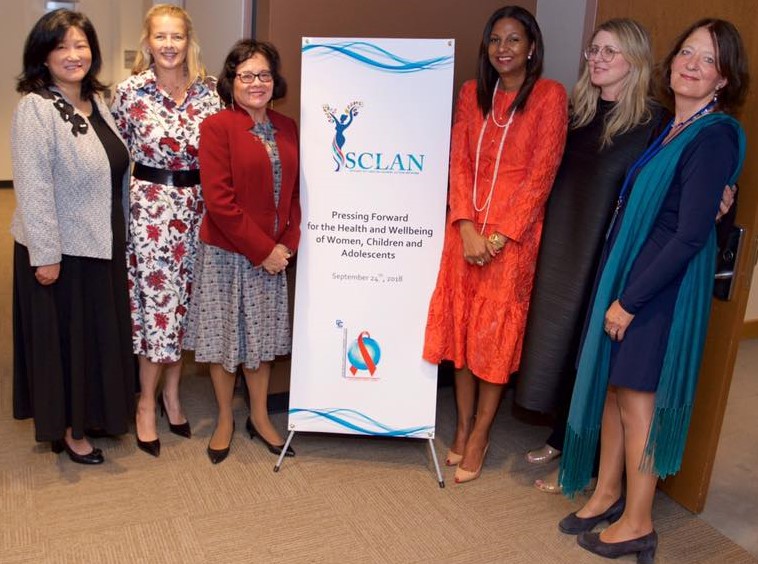 The Spouses of CARICOM Leaders Action Network (SCLAN), in collaboration with the Pan Caribbean Partnership against HIV and AIDS (PANCAP), hosted a Side Event on Pressing Forward for the Health and Wellbeing of Women, Children and Adolescents at the United Nations Headquarters, New York on Monday, 24th September, during the 73rd Session of the United Nations General Assembly (UNGA).

Representatives of international and regional organisations and some CARICOM States participated.

H.E. Mrs. Simplis Barrow in her opening address remarked “Women and children are among the most vulnerable populations in the world. They disproportionately experience illness, poverty, and other types of disparity. Far too many women and children lack access to quality health care, compounding many other threats to their ongoing health and well-being. And while there has been measurable progress in improving overall child well-being, progress has been slow in key areas of adolescent vulnerability, including exposure to violence, early marriage and school completion. Investing in adolescents can accelerate the fight against poverty, socio-economic disparities and gender discrimination. Furthermore, when their health and potential are well protected and developed, adolescents offer a triple dividend to countries. Those investment benefits accrue not only in the present, but also for their future and for future generations.”

Hon. Dr. Patricia Minnis, Spouse of the Prime Minister of The Bahamas and H.E. Martine Moise, Spouse of the President of Haiti (Members of SCLAN’s Executive Committee) and Hon. Eloise Gonsalves, Spouse of the Prime Minister of St. Vincent and the Grenadines also attended and made presentations on the activities in which they are engaged. Dr. Minnis mentioned her work with teenage girls and also noted that the Government of The Bahamas had provided her with an office from which she could function in her capacity as the spouse of the Prime Minister. H.E. Mrs. Moise referred to her activities relating to the registration of Haitian citizens and her advocacy of vaccinations for young children. Mrs. Gonsalves pointed to the many social and economic challenges facing women and children in the Caribbean and the need for collaborative effort given the Region’s challenges.

The Opening Session was addressed by Amb. Deborah Birx, US Global AIDS Coordinator and Special Representative for Global Health Diplomacy; Dr. Marijke Wijnroks, Chief of Staff, The Global Fund to Fight AIDS, Tuberculosis and Malaria (GFATM); AND Princess Mabel Van Oranje, Chair of Girls Not Brides who noted how their organisations’ respective priorities were coherent with those of SCLAN. The Keynote Address was delivered by Ms. Shannelle Hall, Deputy Executive Director of the United Nations Children’s Fund (UNICEF), who spoke on SDG Progress in Favour of Women, Children and Adolescents.

Several organisations focusing on the vulnerable sectors of the population made presentations in the Second Session. These were:
The importance of Comprehensive Sexuality Education to Ensure Sustainable Development, Gender Equality and the Human Rights of Adolescent Girls and Young Women by Mr. Dereje Wordofa, Deputy Executive Director (Programmes), United Nations Population Fund (UNFPA); Leadership and Innovation for Results in the Elimination of Mother-to-Child Transmission (EMTCT) of HIV and Adolescent Care by Mr. Chip Lyons, Chief Executive Officer and President of the Elizabeth Glasier Paediatric AIDS Foundation; The Power of the Strategic Use of Data to Drive Transformational Change on Gender-based Violence by Mr. Gary Cohen, Board Chair and Founder of Together for Girls, Executive Vice-President, Global Health BD and President, BD Foundation; Partnerships for Impact on HIV and AIDS by Dr. Betty Chiang, Vice-President of Public Health and Medical Affairs, Gilead Science Inc.; and Fast-Tracking Implementation to end HIV/AIDS and TB by Mr. Tim Martineau, Acting Deputy Executive Director, Joint United Nations Programme on HIV/AIDS (UNAIDS).

In her closing remarks, Mrs. Granger observed that the success of SCLAN’s first international event could not have been achieved without the support of many persons and organisations. She thanked the United Nations and its Staff for facilitating this event; PANCAP for its invaluable support; the panelists for their contributions to the discussion on meaningful collaboration for the health and wellbeing of women, children and adolescents; the participants for their interest and their time; and the Staff of the Permanent Mission of Belize to the United Nations, assisted by the Permanent Mission of Guyana who had worked assiduously in the administration of the Event.

CARICOM Leaders endorsed the establishment of SCLAN during their Inter-Sessional Meeting held in Georgetown, Guyana in February 2017. The Network was officially launched in September 2017 in Belize.